Enter your details to download the free e-book
X Submit

YEAST FERMENTATION IN BREAD – HOW DOES IT WORK?

Fermentation is an essential process when making dough, helping make foods such as bread and bakery items easier to digest, more nutritious and it also adds wonderful flavour.

There is evidence of fermentation being used by humans in the production of food and beverages for over 10,000 years1. The relationship between yeast and fermentation is a fascinating one.

Let’s start with yeast. Baking yeast is used to leaven, develop and give flavour to dough. It is available in different forms, and choosing which one to use will depend on baking requirements and storage facilities. 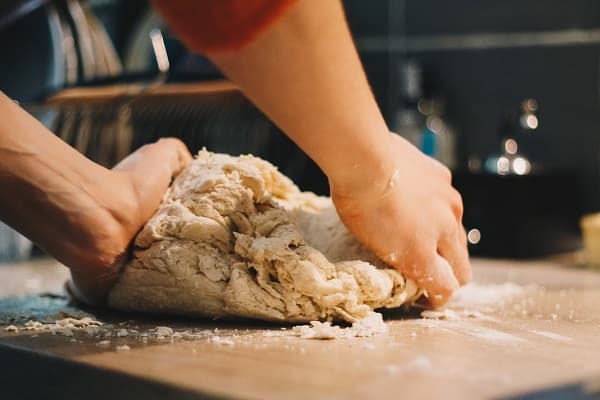 Here is a quick overview of the different types of yeast available:

What exactly is Yeast Fermentation?

Yeast fermentation is responsible for a number of functions in breadmaking which gives the final bread its characteristic shape and texture. The main functions that the yeast performs is to:

1. Create gas which is trapped within the dough structure and gives the desired loaf texture and volume.
2. Mature the dough by the effect of conditioning the gluten.
3. Create compounds as a result of this fermentation which gives the bread product its characteristic flavour and aroma.

Here’s how this amazing living organism does the job.

Yeast is a living organism which needs food to survive and grow. Yeast fermentation is a metabolic process that occurs when the yeast feeds off a range of carbohydrates (starches and sugars) that are in the flour, breaking them down and releasing carbon dioxide, ethanol, flavour and energy. Carbon dioxide is responsible for leavening in baking and is produced by the yeast organisms as it divides and multiplies while the dough rises and proofs, increasing the dough volume. Upon baking there is a rapid activity of the yeast and an expansion of the gas cells until heat ceases this process and the final loaf characteristics are formed.

Some bread is made from a process where the dough is fermented twice. The fermented dough is degassed so that the yeast is refreshed and can continue to convert starches to sugars, ethanol and other compounds. This enables the dough to develop more flavour and gluten maturity throughout the last prooving stage before baking.

Yeast’s second main role is assisting with developing and strengthening the gluten network in dough. Gluten traps gas produced by the activity of the yeast, so without it bread and baked products are denser. During this fermentation process the more of these gas bubbles that are formed produces bread with a finer crumb structure.

The third benefit of yeast fermentation is the development of flavour into bread and baked goods. During fermentation, the enzymes in yeast break down starch into more flavoursome sugars and release carbon dioxide and ethanol in its process, as well as a whole range of by-products like amino acids and organic acids. It is the type and amount of these compounds produced during the fermentation process that produces the unique flavour and aroma of the product. Sourdough bread is a good example of this unique and extended type of fermentation.

Apart from the fermentation by the yeast to produce unique flavours, other components in the dough are catalyzed as a result of this function. Many types of bacteria are also growing, which can give bread a scrumptious tangy flavour.

The wonders of baking yeast and yeast fermentation!

To enhance the production of baked goods in your kitchen, the highest quality bakery yeast can be sourced in all forms from Lesaffre. Contact our team today to discuss which yeast solution will work for your commercial bakery.